Okay, I admit it. Brooke Burke isn’t quite as attractive without makeup as she is with it. Now that I’ve said it, I’d also like to point out very few woman in Hollywood are as attractive without makeup. I think that goes with a lot of women who aren’t in the spotlight as well. I definitely know that’s the case with me. With that said, I don’t think Brooke Burke looks all that bad without makeup and I love the fact that she’s confident enough to hit the beach barefaced even though she knows she’s going to be photographed. Shown here with husband,David Charvet in Miami, Brooke doesn’t seem to care less about who sees her without a stitch of makeup. She’s just relaxing and having a good time. I think Brooke’s a class act all the way and I’m thrilled to see her showing the world that’s she’s comfortable with who she is. 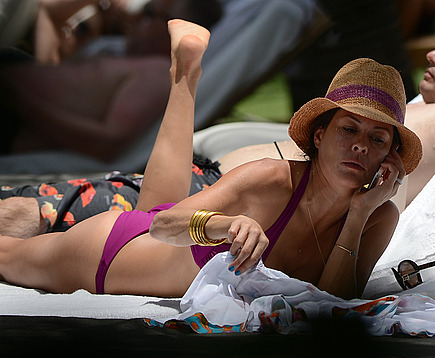