Karissa Shannon doesn’t appear to have a care in her pretty blond head as she enjoys her time at a hotel in Las Vegas. Surely there must be at least one though. It can’t be easy to ignore the fact that somewhere out there, a sex tape exists featuring you and a pretty, albeit heavily surgically altered woman named Heidi Montag. It must be even harder to ignore the fact that said sex tape is apparently in the hands of Montag’s ex-husband; a delightful fellow (if you could see my face, you would see my eyes rolling right now) named Spencer Pratt. Somehow, though, Ms. Shannon, former girlfriend of none other than Hugh Hefner, doesn’t seem all that concerned. Some believe that could be because all this drama about the sex tape is nothing other than that – drama… carefully orchestrated to bring Heidi, Spencer and Karissa back into the headlines. Could it be true? Well, no one knows other than the three parties involved, but I’m sure the truth will come out. It usually does. 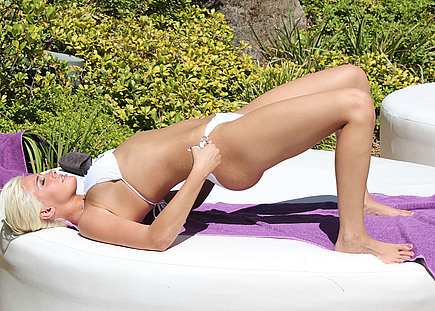