Here is Miley Cyrus at her photocall and press conference at Ideal Cinema in Madrid, Spain. I don’t really know what to say beyond that because I really don’t know how I feel about Miley anymore. She’s cute enough, but she looks well beyond 17. Maybe that’s how she got her paws on that naughty bottle of beer she was photographed with while working in Spain. I think it likely has more to do with the fact that she’s Miley freakin’ Cyrus and Miley freakin’ Cyrus can do whatever she wants. Ah well, what can you do? I’m not going to chide her too much for having a drink. I was drinking when I was 17. I was even drinking in bars when I was 17. Besides, after her recent split from her pretty boyfriend, she must be in a rush to find someone new. I mean, come on – in the past however many years she’s been single for about two days. She must be jonesing for a new BF by now. 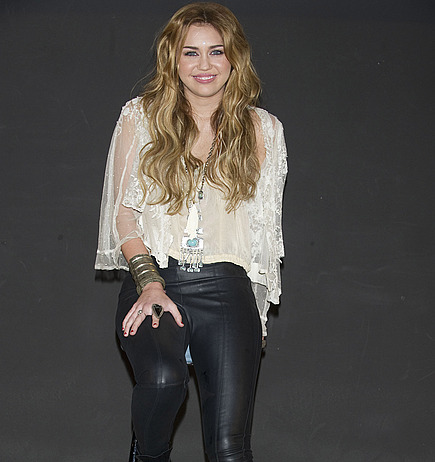