Taylor Momsen. For those that frequent this site, you’re probably familiar with Taylor’s usual rather risqué attire. It’s been said that Taylor choose her clothes to make a statement – to be edgy and daring. I wish I could have five minutes with this girl to tell her dressing like a skank doesn’t make her look cool. It just makes her look like a skank. Sad but true. She doesn’t need to do it. She’s a beautiful and talented girl. When I saw her name come up on my screen, I expected her to be in her underwear on stage somewhere doing her normal slut-rock thing, but instead, I saw her wearing clothes that could almost pass for normal. Hell, I was just shocked to see her wearing clothes at all. While certainly not age appropriate considering you can probably see up her dress (I refuse to look that close), the fact that she’s wearing a dress at all is fairly impressive. Maybe she’s starting to realize she doesn’t need to show off her body to get attention. Nah. It was probably just a little cold out. 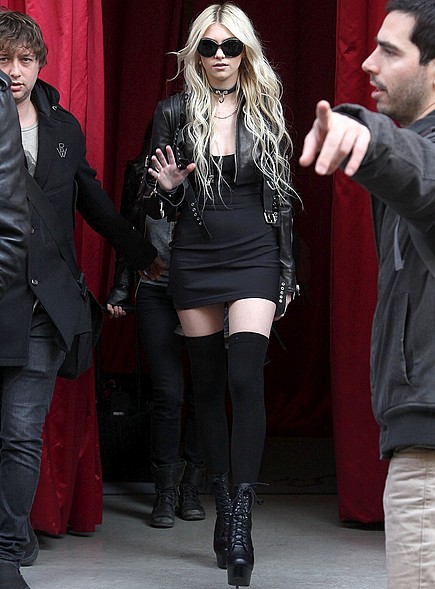