AnnaLynne McCord Gets On The One Piece Bandwagon

AnnaLynne McCord is a beautiful woman. There’s really no doubt about that at all. Her bikini pics are among the hottest out there and for a while, it seemed like there was a new set to drool over every single week. I’m not AnnaLynne’s biggest fan but I always like looking at pictures of her. I guess I have complex feelings about her. Regardless, as much as I love AnnaLynne McCord bikini pics, there’s something to be said for a sexy one piece swimsuit. It’s kind of odd. Somehow, AnnaLynne can switch from a bikini to a one piece and still show just as much skin. I suppose we can thank the “90210” wardrobe department for that one. As the cast and crew of “90210” set up shop by the pool at a popular Los Angeles hotel on December 13, 2011, it’s pretty clear the temperatures aren’t ideal for filming a pool party scene as Ms. McCord snuggles up in a robe, jacket and boots between takes. I have to hand it to the lady though, when the cameras start rolling and the jacket, robe and boots come off, you’d never be able to tell the poor girl was freezing her butt off. 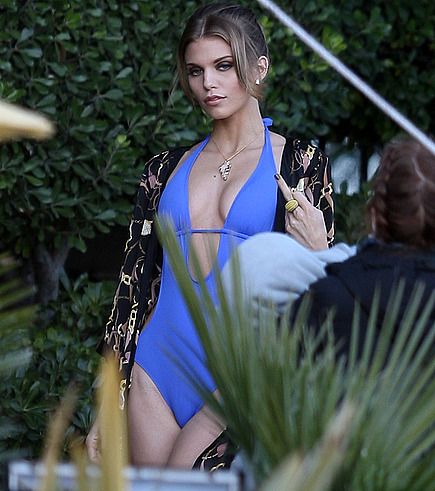