Bar Refaeli Looks Just As Sexy As One Would Expect.

Bar Refaeli may have gotten the bulk of her fame when she dated Leonardo DiCaprio but I don’t think that should take away from the work she’s done as a model. This is a woman that is successful in her own right and I think it’s important to point that out. Bar never seemed to be out to capitalize on her relationship with him. She attended events with him but she seemed to back off and let him have his moment – something I always admired about her. Many of the other women who become well known because of who they’re dating take every opportunity they’re given to show off their relationship and Bar never gave me that impression. Since breaking up with Leo, Bar has remained successful and I think that will continue. In these photos from Mykonos, Greece, it’s pretty obvious Leo is little more than a distant memory in her mind. She has definitely moved on and good for her. I think Bar is a classy, beautiful woman and I see nothing but success in her future. 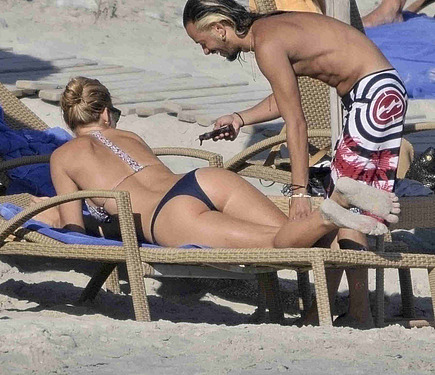