I like Angela Simmons. I don’t know what it is about her exactly that I like about her. She’s really mostly well known for being Joseph Simmons’ (legendary musician and producer, Rev Run) daughter and appearing on his reality show, “Run’s House” but for some reason, the fact that she’s really only famous for having a famous father doesn’t really bug me that much with Angela. Perhaps that’s because she’s taken her time in the spotlight and tried to do something positive with it. First, she along with sister, Vanessa, design shoes for their “Pastry” shoe collection but beyond that, Angela also edits “Angela’s Rundown”, a monthly magazine that targets teenagers and discusses issues facing them. I think that’s really important. She seems like a good role model for the most part. Here in Miami, Angela shows off part of why I think she’s someone young girls can look up to. Sure she’s showing a lot of skin, but she’s showing it on the beach and I’ve got no problem with that. What stands out more for me though is the fact that she just looks so comfortable and casual. It doesn’t look to me like a trip to the beach is a press op for Angela. I like that and I respect that. I think there are big things in this girl’s future. 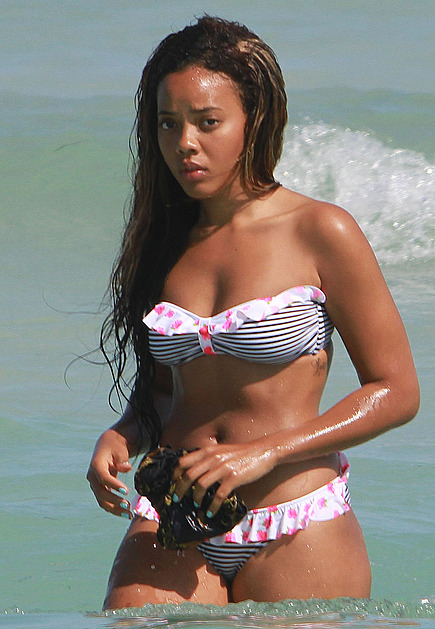