When it comes to women in bikinis, there is little I love more than a woman who looks comfortable and confident. I don’t care about what body type they are. I think confidence is sexy. This is a big part of the reason I’m so attracted to Imogen Thomas. She isn’t stick thin but it doesn’t matter. As these photos from Koh Samui, Thailand show, she looks like a healthy and happy. I absolutely love that in a woman. I read an article recently that called Imogen out for being chubby and unattractive. First, I don’t think chubby is unattractive as long as the woman is comfortable in her own skin. Second, I don’t think Imogen’s chubby. I like the fact that you can’t see all of her bones poking out under her skin. I don’t know it became sexy to be skeletal. I, myself, am a very skinny girl – all collar bone, ribs and hip bones. I’m pretty much okay with that but if I could choose another body, it’d be one like Imogen’s. 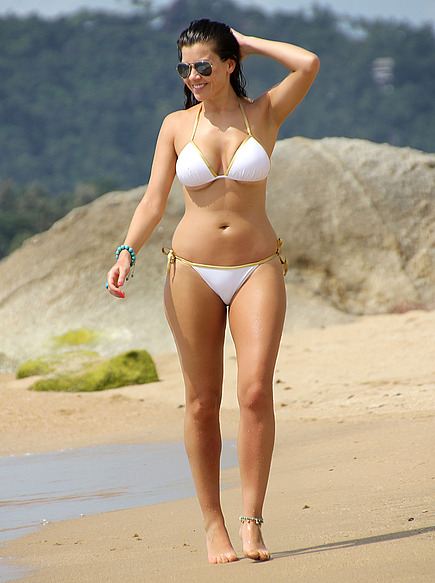