It goes against my better judgement to write about any of the women featured on MTV’s ‘Teen Mom’. I’ve never watched the show and I don’t intend to change that. That doesn’t mean I haven’t heard of Farrah Abraham. She’s now a celebrity and – like most of the other girls on the show – she got that celebrity status by getting pregnant as a teenager. I have heard mixed things about the show – some saying it glorifies being a teenage mother and some saying it shows the realities of it, but I have a hard time justifying putting these women in the limelight. I grew up in a small town. Most of the girls I went to school with ended up having kids before they turned nineteen. Do I think a show like this would’ve stopped them from making the decisions they made? No. Not at all. I suppose if it does help someone out there decide to abstain from sex or at least have safe sex than it’s worth it, but the real result of the show is pictures like these. Yeah, she’s hot. She’s also a kid with a kid and I have a hard time thinking of her as anything but that. 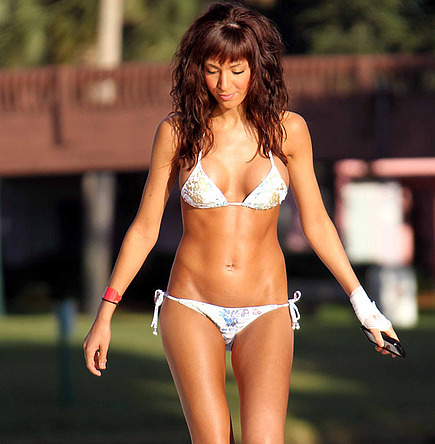