A lot was made of these shots of erstwhile Ginger Spice, Geri Halliwell, manhandling her own boobies on a boat recently, but hey, a girl has to make sure her girls are still under wraps. After Geri’s infamous nip slip at the Brit Awards in the Spice Girl’s hay day, one can’t blame her for wanting to keep that from happening again. Sure, her boobs are nothing we haven’t seen before. Remember those infamous nudie pics that came out that apparently got her kicked out of the girl power squad? Nice. The thing that really gets me about these pictures is that Geri still looks every bit as good as she looked back when she was still dancing alongside Scary, Baby, Posh and Sporty. Way to go Ginger! Girl power, indeed! 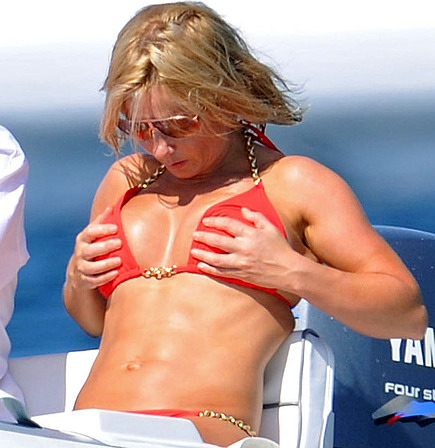