I used to have a serious girl crush on Hayden Panettiere. She was classy yet innocent and sweet. Three things I love in a girl. Need I remind anyone of that adorable Hello Kitty bikini she completely rocked a few months back? I guess I still like her enough. She looks pretty hot in that blue bikini and I love a girl that isn’t afraid to cover up in a nice man shirt. I’m just not feelin’ it like I used to. Sure she’s hot, but these pictures feel a little lacking in personality. Then there was the debacle with the nipple pasties at the Golden Globes and… I lost a little respect for her. She doesn’t need that sort of stunt to get people interested. Leave showing off your own personal golden globes to someone a little more desperate and sleazy. That said, I’m still pretty excited to say Scream 4 (much as I hate to admit it). Wait… Hayden is in that… right? I can’t remember. Don’t hear much about her being in it. Okay, maybe the nipple pasties weren’t such a bad idea after all. 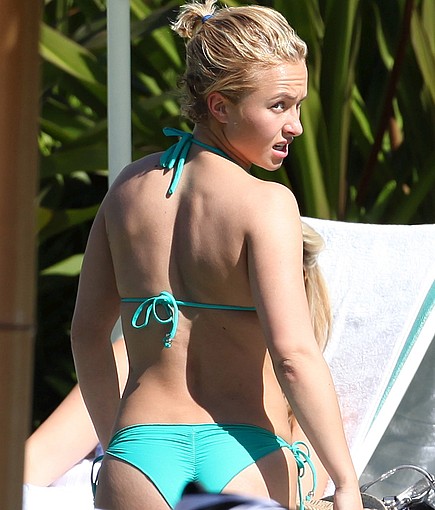