Heidi Montag took a break from ‘accidentally’ flashing her big ‘ole fake boobs to the press to, well, do whatever it is Heidi was doing in Costa Rica. Here’s the disturbing part. As much as I loathe everything about this bimbo, I have to admit, she looks pretty cute here. I love the busy print on the bikini and I love that there’s actually a little bit of expression on her face. She looks like she’s kind of having fun. I don’t know that a sex tape actually exists or if it was another one of Speidi’s publicity stunts, but I dare say, I might actually watch it if this is the Holly on the tape. I’m a little curious though. Her mouth is open in all of these pictures. Do you figure one of those ten plastic procedures robbed her of the ability to close her mouth? If not, it’s a shame. Heidi is definitely one of those girls that should be seen and not heard. I think that’s the way she likes it. 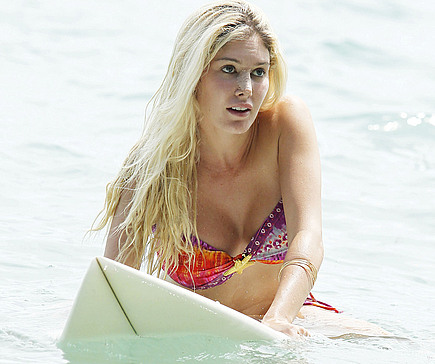