Isabeli Fontana is a super sexy Brazilian model known almost as much for her rather tumultuous personal life as her work as a model. Sure she stirred up controversy with her appearance in Victoria’s Secret magazine at the tender age of sixteen, but it’s her twice married status that really gets the attention. Isabeli is only twenty-seven and has been married not once, but twice and is currently separated from the second husband. Here in Rio, though, she doesn’t seem to be letting it get her down and who can blame her. She’s clearly having fun and putting the past behind her. With two children to look after, that’s probably the best thing for everyone. I love a woman who can keep her head up in the face of adversity and who can look that smoking hot in a bikini after birthing two children. Love this girl. 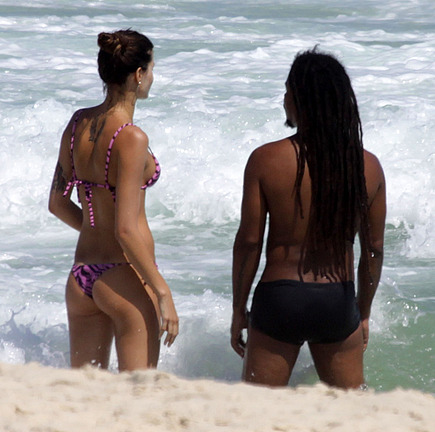