Here are some pictures of “Jersey Shore” stars Jennifer “Jwoww” Farley and Snooki vacationing in Cancun. What are they on vacation from? I have no idea. The bigger question for me is how they actually know they’re on vacation. Oh, and Snooki’s pregnant so you can just go ahead and insert your own “Snooki’s pregnant” joke here. I have to be honest. I don’t typically like the reality show celebrities but I actually like Jwoww. I stopped watching the show after Mike knocked himself out with that wall, but when I was still watching, Jenni was always my favorite. She got caught up in the drama sometimes but she usually seemed to have at least somewhat good intentions. And yes, I admit I like Snooki too although I can’t explain why. I feel like I should really dislike her but I just can’t quite do it. I don’t think she’s nearly as bad as people like to make her out to be. The actual show though? Yeah – pretty bad. 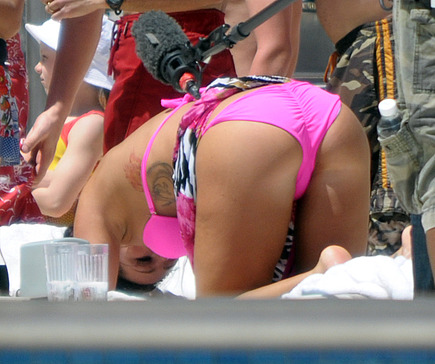