It’s kind of weird to see Karissa Shannon doing something relatively normal while wearing something moderately conservative. I mean, sure, she’s wearing shorts so short her ass cheek hangs out a bit and a short so tight you can see every curve of her upper body but the fact that she’s wearing shorts at all is a step up from her usual attire. She has a killer body and she loves to show it off – as often as she can. I suppose there’s nothing wrong with that. It’s really her fame-whoreynesss that bugs me, but she’s hardly the worst offender. There are rumors that Miss Shannon has written, or is going to write, a tell-all book about her time at the Playboy Mansion that has a lot of Hugh Hefner’s previous girlfriends up in arms, and likely Hef himself. If I were here, I’d be a little more careful what bridges I burned. If it wasn’t for Hef, no one would even know her name. Come to think of it, would that really be such a bad thing? 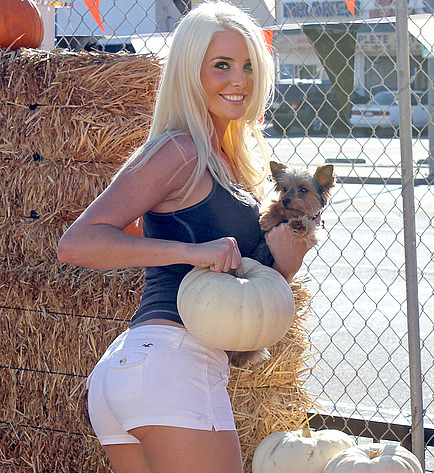