Kristin Cavallari Is Proud Of Her Ass

I’m not generally a fan of ‘reality’ television. There’s a reason for that. There’s nothing real about it. That’s kind of false advertising, isn’t it? The stuff that happens on those shows is about as real as the tans on ‘Jersey Shore’. I don’t like the shows and I don’t care for the stars of those shows either. Kristin Cavallari is an exception but only because she’s hot and I like hot chicks. Here in Miami, Kristin takes a little time out of what I’m sure is a very busy and stressful schedule to hang out by the pool in a sexy white bikini and I’m just fine with that. I’ll likely never watch whatever reality show she’s a part of next, but I’ll definitely watch her lounge around in bikinis anytime she wants to slip into one. Now that’s entertainment. 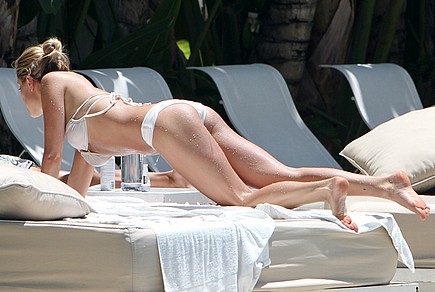