Not long ago, I wrote a post about LeAnn Rimes and decided to take it easy on her, complimenting her healthier looking body and whatnot. That was then and this is now. While I love seeing female celebrities acting normal and having fun, the while Eddie Cibrian/LeAnn Rimes thing still bothers me tremendously. To be clear, it isn’t just the cheating that bothers me. It’s the way LeAnn and Eddie handled the fair. First, they denied it, even partaking in separate photo ops with their respective spouses to give the impression that all was well in their individual marriages. Then rumors came out that Eddie and LeAnn were still seeing each other. Not long after, petitions for divorce were filed and Eddie and LeAnn started hitting red carpets together and posing for photo ops like these. It seems so shady and so disrespectful on so many levels. I guess that’s Hollywood for ya though. Anyway, these pictures were taken as LeAnn and Eddie enjoyed a rousing game of boccie ball with a few friends in Maui. Apparently, at some point during the game, Eddie grabbed LeAnn’s rear end despite (or possibly for the benefit of) the cameras busily snapping pictures of their game. Classy. Ah well, who am I to judge? They’re obviously have fun so good for them. 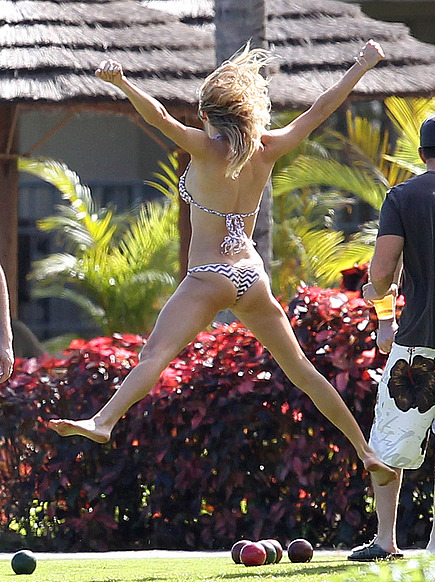