Leggy Audrina Patridge Hits The Beach With A Friend

Are you surprised to see Audrina Patridge on the beach in anything other than a teeny tiny bikini? I am, but there’s a reason for it. Apparently Audrina had an allergic reaction to some sort of spray tanning product which meant she had to cover up a little more than she normally would and you know what? I think the pictures are better for it. Sure Audrina has an incredible body and knows how to rock a bikini but it’s nice to see a different look on her. I think she chose the perfect outfit for her walk on the beach with a friend before the “Finest Clubs” awards, held for the first time in Cabo. While the reason for the more conservative look may have been unpleasant the result certainly wasn’t. These pictures are some of my favorite pictures of Audrina. She looks mature, sexy and most important, is actually wearing clothes that leave a little something to the imagination for once. 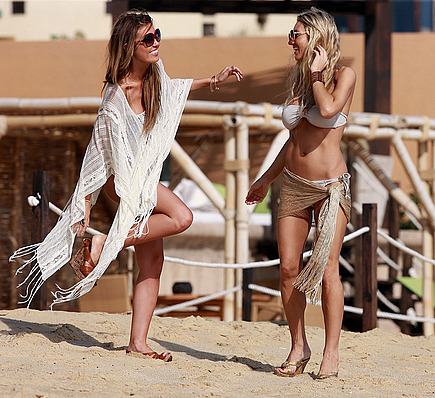