Are we really still talking about this girl? In my always very humble opinion, Courtney Stodden (or the Teen Bride as she’s likely more commonly known) is a whole new low in “famous for being famous” celebrities. As a culture, I think we’re often fascinated by things we don’t understand. I think we like to be angry and outraged and for a lot of people, 16 year old Courtney’s marriage (her husband is 51 year old actor, Doug Hutchison) has drawn so much attention for both of those reasons. We not only can’t understand why this beautiful young woman would marry a man so much older than her but also why her mother would give permission for such a thing to happen. It makes people angry. I try to keep an open mind about everything but this one is really tricky for me. Here in Malibu, Courtney actually looks happy. Maybe all the outrage is unwarranted. If she’s happy, healthy and feels good about the decisions she’d made, that’s her business. I don’t believe a girl her age is incapable of making smart decisions. When I was 16, I was more mature than many of the older people in my life. Somehow that’s changed now and at 30 I’ve the maturity of a teenager, but that’s beside the point. I just hope Courtney doesn’t look back on this time in her life one day and regret not really taking the time to be a teenager. I worry for her but I suppose it’s really none of my business. I wish her the best of luck although I think she’d have a much better chance of having a healthy and happy life if the press would turn the cameras off. 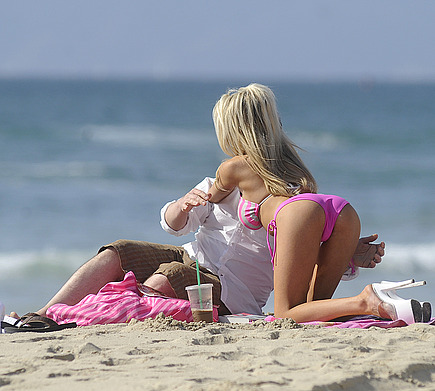