Paris Hilton Bares It All… Sort Of

Using nothing but her arm and strategically positioned greenery, Paris Hilton gives the world what it wants – a look at her body. I like Paris Hilton but it’s one of those guilty pleasure sort of things. She’s a spoiled brat. She’s a fame whore. She’s everything I hate in a celeb, but for some reason, I like her. She isn’t the most attractive girl in the world. She has a sort of man-ish thing going on, but she has one heck of a body. I guess she’s got that going for her. The only thing I don’t like about her is the same thing I don’t like about AnnaLynne McCord except multiplied – she’s too damn skinny. I guess coke does that to a person though. Remember when Paris said she didn’t use drugs? I know, I laughed too. I love this kooky, vapid chick. I won’t apologize for that. 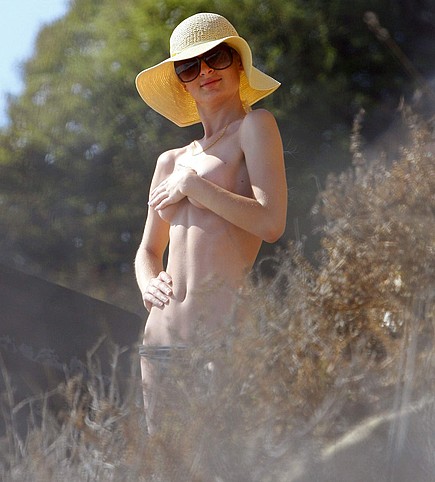