Paris Hilton Can’t Dance But Is Great At Posing

While on their own, these pictures of Paris Hilton at the Supermartxe VIP Party at Fabrik disco in Madrid, Spain are pretty hot. She looks good, right? She’s got all the standard Paris Hilton poses included – the ‘hands behind her head checking out her own boobs’ pose, the ‘bending over and sticking out her ass as far as possible’ pose, the ‘grabbing her own ass to call attention to it’ pose – and on their own, things look fine. When you see her actually dancing though? The girl has no rhythm at all. I mean, she’s not Elaine from Seinfeld bad, but a lesson or two wouldn’t hurt her. Who am I kidding though? No one pays attention to how well she’s moving as long as she showing off tits, ass or both while she’s doing it. And we’re talking about Paris here, so she usually is. 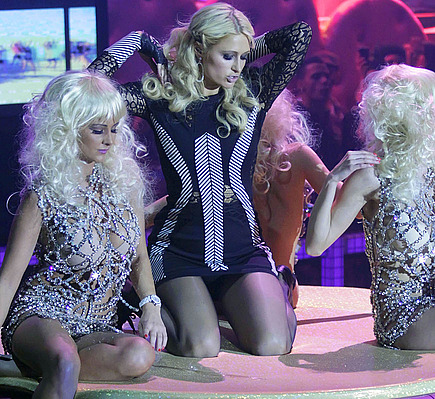