Paris Hilton Shows Off Her Boobs

I like boobs as much as the next mostly straight but a little curious girl, but there’s something a little underwhelming about Paris Hilton’s fun bags. Maybe it’s the fact that if she isn’t showing off the v she’s showing off the t. It’s a little hard to get excited about seeing something you’ve seen a million times. I mean, at this point, I’ve seen Paris Hilton’s boobs almost as much as I’ve seen my own. All the same, Paris looks pretty hot as she presents Supermatxe Motorcycle Team at Hotel ME, Madrid – hotter than she’s looked in a long time. The question that begs to be asked, though, is does anyone actually care about this babe anymore? Isn’t she a little last year (or two years ago, for that matter)? I guess all that really matters is that Paris is willing to pose like a stripper every chance she gets so she can try to stay relevant. That’s really her ace in the whole, but seriously – has anyone else seen ‘Repo! A Genetic Opera’ and felt a little sad that Paris made herself such a joke that no one cared she was actually pretty good in that movie? 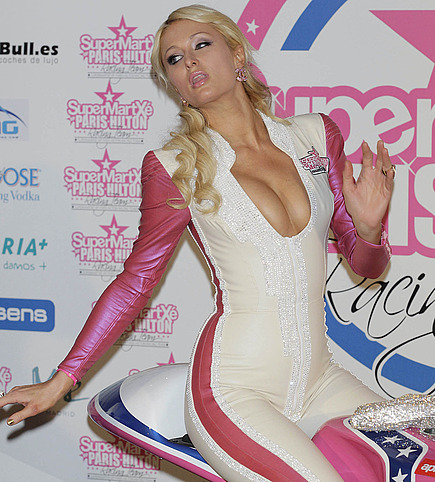