Rachel Uchitel On The Beach

I don’t give a rat’s butt about Rachel Uchitel. I don’t care how hot she is or how good she looks in a bikini, this woman pisses me off. She got famous for her affair with Tiger Woods and then whined and complained because everyone called her a whore. She scored some ridiculous amount of money out of that whole Tiger mess. Just take the money and disappear. Stop acting like a celebrity. When it was announced she was going to be on “Celebrity Rehab”, I wanted to laugh, but I was too busy weeping over what the word celebrity has become. There was a time when celebrities were people who had done something noteworthy to gain the attention of the public. Now any bimbo willing to polish Tiger Wood’s golf club can attach celebrity to their name. The definition of a whore in the true sense of the word is someone who exchanges sex for money. Rachel slept with Tiger and for a huge sum of money for it. Draw your own conclusions from that. 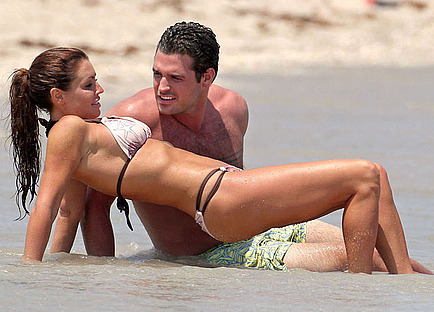