Well these photos probably aren’t going to do anything to quiet the rumors that Maria Menounos and her “Dancing with the Stars” pro partner, Derek Hough, are more than just dance partners. I don’t know if that’s the case and won’t make a judgement based on these photos, but if it is the truth, I support this couple wholeheartedly. Sure he can be a bit tough on her during rehearsal but he’s trying to get the best possible performances out of her and considering how well they’re doing on the show this season, I think he’s doing a good job. They work so well together and while the status of their relationship isn’t clear from these photos, taken at the Bud Light Lime-A-Rita in Las Vegas, one thing sure is – these two have a great time together. Then again, Maria seems like the kind of woman that has a great time regardless of who she’s with or where she is. That’s why I love her so much. She’s just a positive kind of person. The world needs more Marias! 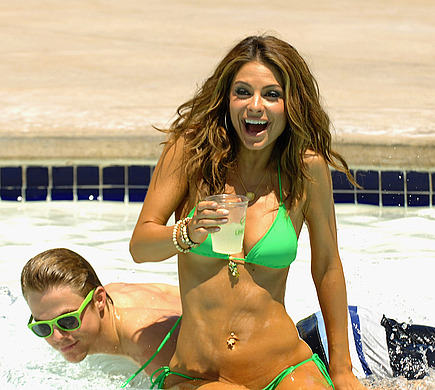