Sexy New Pics Of Vanessa Hudgens And Her Boyfriend

I won’t lie. I’m loving this beach vacation Vanessa Hudgens seems to be on. She looks like she’s having a great time with her new boyfriend Austin Butler and that’s so good to see. Vanessa has had a rough go of it so seeing things starting to look and seeing her with what looks like a very genuine smile on her face is great. I remember back when the second set of naked Vanessa Hudgens pics hit the net. I really thought a lot less of her for them. Sort of a fool me once sort of deal. I felt bad about that when word came out that the second set was actually taken at the same time as the first set and that whoever had stolen them was splitting them up into groups to release every time Vanessa had a new project coming out. That seems like more than a ploy to make money or embarrass her. That seems to me like a personal grudge. It’s a shame. She made a mistake but Vanessa seems like a strong young woman capable of moving on and rebuilding herself. Perhaps her relationship with Austin is another step on that journey. 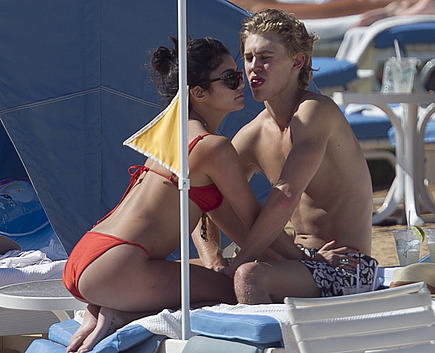