Teen Bride Courtney Stodden Shows Us How Classy She Is

By now, most of you have heard of Courtney Stodden or, as she is more widely known, the ‘Teen Bride’. For those of you who haven’t, here’s the whole disgusting story. Doug Hutchison (“The Green Mile, Lost), 51, married Courtney Stodden, 16, a few months back after Courtney’s mother signed a consent form allowing it to happen. First, I don’t believe for a second that this woman is sixteen. She looks to be at least in her late twenties. I credit that to the layers of makeup she has on her face. When you see pictures of her without all that makeup who looks far younger. Anywho, so naturally, the press ate this story up for the first week or two. Now Doug and Courtney are sort of fading into the background so what better way to get those cameras snapping away again that to slip Courtney into the skimpiest outfit possible for a little ‘holiday shopping’. Where did they choose to do their shopping? Why at known paparazzi hang out, The Grove, of course. As if that’s not enough, Mom decided to tag along as her daughter shopped at Victoria’s Secret. This whole situation is just so insane to me. Then again, who am I to judge. Maybe Doug and Courtney are really and truly in love. I doubt it but I suppose it’s possible. After all, no one thought Demi and Ashton would last and… okay, bad example. 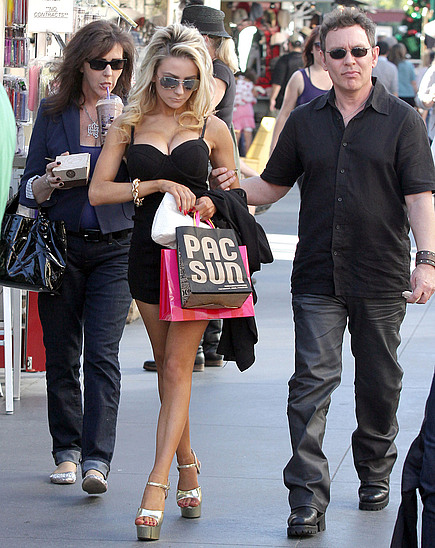