Okay, I’ll be honest. I had no idea who The Saturdays until this post came up. Apparently, The Saturdays are a British/Irish girl group that formed in London in 2007, made up of Frankie Sandford, Vanessa White, Una Healy, Mollie King and Rochelle Wiseman. I don’t know who is who, but I listened to a single or two, and I’ve heard worse. They seem to be a slightly poppier, more attractive Pussycat Dolls. Regardless, after watching the video for “Just Can’t Get Enough” in which each girl is shown with her name, I still can’t figure out which one is showing off her cooch in these pictures. I don’t think it really matters. Anyway, they all look pretty good as far as girls in bikinis go, but I’m not sure I’d really go crazy over any of them. 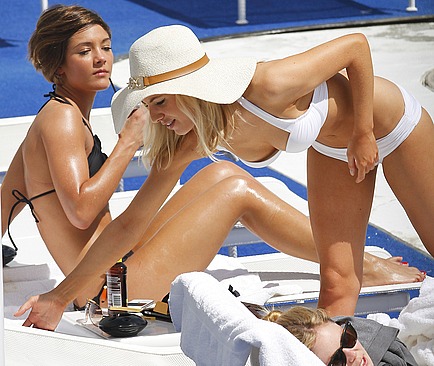