In Hollywood standards, time is running out for Vanessa Hudgens to prove she’s more than a Disney princess. Her last two movies, ‘Band Camp’ and ‘Beastly’, have been less than smash hits. With ‘Sucker Punch’ though, I really think she has the chance to turn that around. Why? She’s playing to her strengths – she’s looking hot, sexy and backing away from the good girl Disney image. These pictures show that pretty well. I honestly think Vanessa can act and she’s a gorgeous girl. If she makes the right career choices I think she has a shot at one day being a leading lady. I have a slightly different view on the whole naked pictures thing. While there have been three separate leaks, it seems they’re all from the same set of pictures and they seem to have been obtained by a ring of hackers that specifically target female celebs (the count is at fifty different victims as I type this). How about leaving the poor girl alone now? My advice to Vanessa is to think back to those pictures and tell everyone what’s in them. Either that or put them out there yourself. The hackers are going to keep leaking them unless they can’t get any money for them. If you release them yourself, you take away their value and can at least control when and how the public sees them. Just a thought. I’d hate to see your career torpedoed by some over zealous hackers who seem to have it in for you. 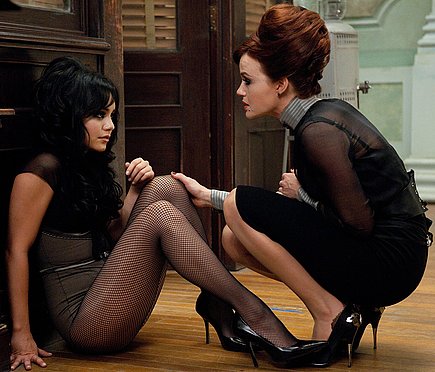