AnnaLynne McCord At The Heel-A-Thon Run

AnnaLynna McCord is taking a break from her usual strutting around in bikinis to participate in the Heel-athon run in Central Park alongside one of my favorite actresses, Kristin Chenoweth and daytime star Kelly Rippa. For those that don’t know, the Heel-A-Thon run raises money for National Institute of Health’s The Heart Truth Campaign. The Heart Truth Campaign seeks to educate women and men about heart disease through activities such as this run. Kelly Rippa came up with the idea for the Heel-A-Thon when she had to run through the studio where her show, Live with Regis and Kelly, is filmed. These three beautiful ladies picked their favorite pair of heels, donned matching black running pants and looked like they were excited for the race as they waited for the race to begin at the starting line. It’s great to see AnnaLynne, Kelly and Kristen participating in such a good cause and doing their part to raise awareness of this important campaign. Way to go, ladies! 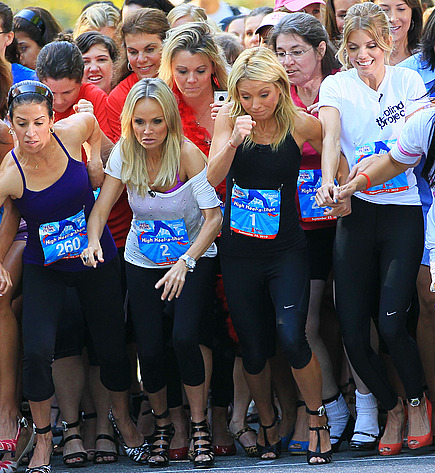