Leighton Meester shows off her beautiful ass wearing her tiny black bikini while soaking up the sun in one of the beautiful white beaches in LA. The Gossip Girl star was spotted having a good time swinging, playing, splashing in the waves and happily walking under the hot summer sun displaying her sexy body with Emmy Rossum and friends. Aside from playing Blair Waldorf in the TV show Gossip Girl, Meester will also be playing Rebecca for a horror movie The Roommate. Leighton Meester will also be one of the cast members for the upcoming comedy film Date Night together with Steve Carell and Tina Fey. 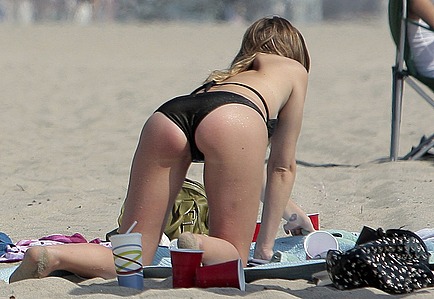