Danielle Lloyd Makes A Splash At The Pool

It’s been an up and down stay in the lime light for Danielle Lloyd, hasn’t it? Sure, she’s racked up an impressive list of wins on celebrity game shows – The Weakest Link, Total Wipeout and Come Dine With Me – and raised a lot of money for charity, but she also has courted quite a bit of controversy. The controversy I refer to, of course, if her somewhat scandalous stay in the Big Brother house where she was accused of bullying and racism. I say if the victim of said bullying and racist remarks stands up for her, the rest of us should let it go too. Racism is wrong. Anyone with even a bit of intelligence knows this, but the editing on these shows doesn’t always show the real story. What matters is that in these pictures from Tenerife, Danielle looks pretty hot. When scandal rears its ugly head, strap on a bikini and hit the beach. Problem solved. 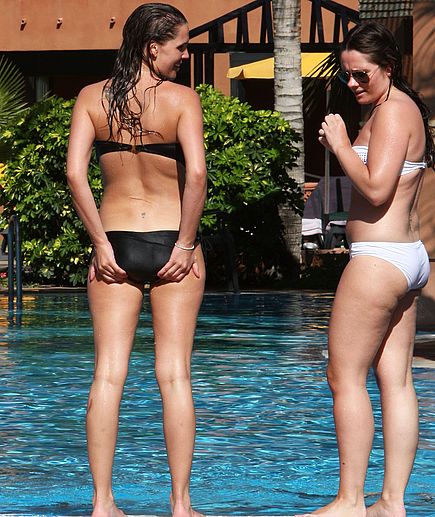