I really had no idea what to come up with for a title for this one. I mean, technically, Selena Gomez isn’t sunbathing topless as she stays concealed but she has untied her bikini top and that’s kind of topless, isn’t it? I don’t know. I guess you have to do what you have to do to avoid those nasty tan lines. I like Selena in a weird sort of way. I like these pictures of her, taken in Orlando, because they show her just sort of relaxing and being a normal teenager. Of course, as these pictures hit the press, so too did rumors that she and Justin Bieber have broken up. Apparently those rumors aren’t true but I don’t know how anyone would be surprised. They’re just young things yet. For now though, all is well with Selena and Justin. 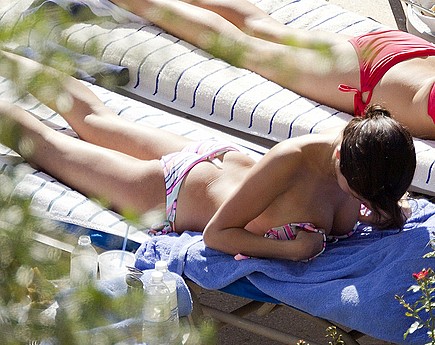