I have long hated Gwyneth Paltrow. Everything about his is pretentious. You can almost imagine the size of the rod that must be up her ass for her to be so incredibly uptight. Then ‘Glee’ happened. What the hell was that? She was… funny. She was… lighthearted. That isn’t the Gwyn I know and hate. I actually kind of liked her. Does that mean I have to rethink my whole position on Paltrow and admit that maybe I was wrong. Why yes. Yes it does. I would like to take a moment to publicly apologize to Gwyneth Paltrow for mindlessly hating her based only on her creation of the ridiculously snobby Goop. (Still hate Goop, Gwyn. Sorry.) Keep us laughing. And while you’re at it, keep showin’ off that hot body of yours in dress like the one you wore to the premiere of Country Strong. Love the tie accents on the dress. It shows a lot of skin but somehow doesn’t look trashy. Classy. We’re cool now, Gwyn but really – we gotta talk about Goop. Call me. 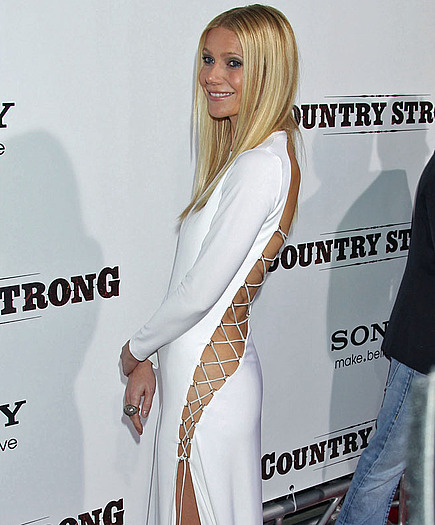