The 19-year-old Heroe’s star Hayden Panettiere was spotted sunbathing on David Furnish’s yacht in Cannes while in the French Riviera for the film festival. Hayden shows off some skin on her tiny orange bikini while soaking up the sun. After calling her relationship quit with actor Ventimiglia last year, it was the second time around that Hayden was spotted hanging out with the 32-year-old U.K. TV presenter Steve Jones. The couple was first seen at London’s Nobu Berkeley restaurant. Gossipers speculated that Hayden split with Milo Ventimiglia because of their 12-year difference. However, this new guy is 13-year older than Hayden, which made the gossipers think. Check out the hottest Hayden Pattiere’s bikini photos. 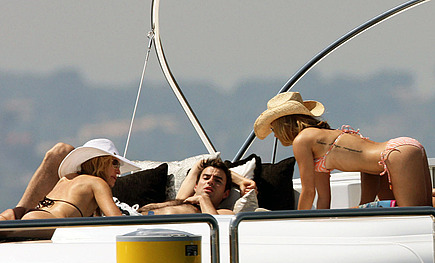